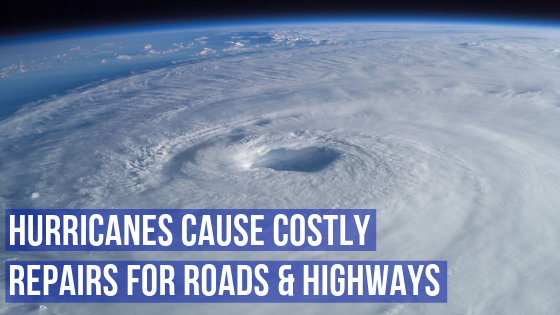 Did you know that in 2017, the trio of hurricanes Harvey, Irma, and Maria alone cost the government $268 billion in damages? According to the Congressional Budget Office (CBO), $28 billion is allocated to hurricane damage annually, with increases projected in the future. While this is an astounding figure, one of the areas with the largest portion of this budget is the Department of Transportation (DOT) for road and highway repair. An average of $4.5 billion is appropriated to the DOT alone. However, depending on the severity of the hurricane this figure could be far larger. For example, the DOT was allocated over $13 billion in supplemental funding in response to Hurricane Sandy.1 Flooding is the main cause of this significant need for infrastructure repair. Excessive rain that comes with flooding as well as storm surges wreak havoc on roads and infrastructure.

Weaker storms with less wind power intensity should not be overlooked, as they can cause just as much, if not more damage than stronger storms. Hurricanes Florence and Harvey both came ashore at Category One, but due to the urbanization of the areas in which they hit, their impacts were exacerbated. Oftentimes areas along the coast are more populated as a result of the desirable location, leading to having more paved roads and infrastructure in place.2 This removes nature’s way of helping protect us from these natural disasters. With more urbanization in coastal areas, hurricane damage costs for infrastructure will only continue to rise.2

As a company that works closely with DOTs and paving companies, our thoughts and prayers are with all those affected by Hurricane Dorian, as well as those who will be working hard on rebuilding what was damaged.

Read Chemtek's full statement in response to the COVID-19 pandemicHERE