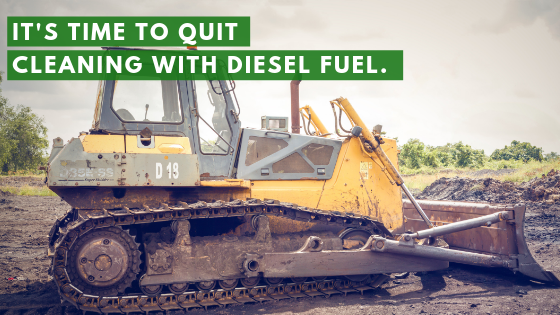 For years diesel fuel was the industry standard for cleaning asphalt off of tools and paving equipment. Many paving crews still use it today despite EPA  regulations and known safety hazards. Switching from a solution that’s been used for years and seems to get the job done may be hard, but the payoff is worth it. It’s important to recognize that continuing to use diesel fuel is hurting the paving industry and businesses in the long run. Not only does it show a disregard for environmental and legal standards, but it also overlooks an alternative that actually works better than diesel. Let’s take a look at why diesel was outlawed in the first place and why switching to a better alternative pays off.

The Resource Conservation and Recovery (RCRA) Act of 1976 made the use of diesel fuel as an asphalt remover and release agent illegal. The Oil Pollution Act of 1990 (OPA) further strengthens the government’s ability to prevent and respond to oil spills. These acts are under the umbrella of the EPA. State and Federal DOTs have forbidden contractors from using diesel fuel on state and federal jobs.1

To regulators, using diesel fuel to clean construction equipment is essentially the same as an oil spill. The “spilled” fuel does not biodegrade and eventually makes its way into storm drains and waterways. This pollution not only harms the environment, but also contaminates drinking water. Heavy fines have been put in place ranging up to several million dollars.2 With the amount of time that has passed since it was first outlawed and the plethora of information on the environmental hazards of diesel fuel, pleading ignorance is no longer an excuse for paving crews.

Contrary to popular belief, diesel fuel is not the most effective method of keeping tools clean from asphalt.  The perceived cost savings of using diesel are short sighted as well. diesel fuel has a low flashpoint meaning it is highly flammable and requires a lot of product to generate adequate cleaning power. PavePro was specifically developed to replace diesel fuel as a more effective, safer alternative. PavePro is specially formulated to attack the bond between asphalt and metal and leave behind a slick, oily film to prevent re-adhesion. PavePro’s high flashpoint allows it to work longer and harder than diesel fuel while also being safer. With an incredibly unique formula, the solvency can be completely deactivated if water is added. This means that an accidental spill onto asphalt will be a quick cleanup, not a process of milling and repaving as it would be with diesel. PavePro also checks all the environmental boxes by being 100% biodegradable and non-flammable. The amount of diesel fuel that would need to be used to get the same cleaning and release power of PavePro makes any perceived cost savings associated with Diesel negligible.

If you doubt PavePro’s superiority to PavePro, test it yourself. Take the PavePro challenge and put it to the test side by side with diesel or any other asphalt cleaning solution today.